CONFORMITY at a COST

Employee Engagement – All About PrideA HIGHER, GREATER and a GRANDER version of ‘I & Me’! 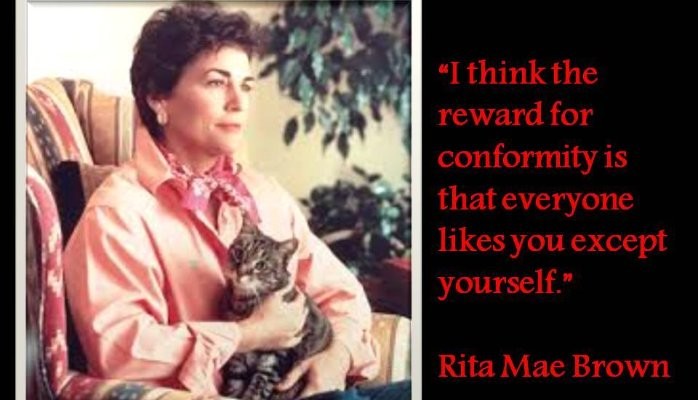 One of the biggest challenges when being a part of an organisation is the pressure to act and behave in ways that seem the right thing to do even if it is against one’s better judgement. About, ‘conforming‘! It is about not getting socially rejected! Sometimes it is about being a ‘Populist‘!

The underlying condition in the above quote of Rita Mae Brown, is that one has conformed when one did not want to, which in turn creates a certain disharmony within the person.

The disharmony results from having paid a huge ‘HIDDEN COST’ by conforming. The not so apparent/hidden cost happens to be something that can weigh very heavily on a conscientious person. It is the person’s very own ‘integrity’ and ‘authenticity’ at the deepest level, that is at stake.

Not conforming is not just for the sake of ‘non conformation’, but for the sake of being authentic to self. Although the fear of being lonely and misunderstood, which is a very real ‘fear’ and a threat that we perceive, might force us to conform even when it goes against our grain. What needs to be remembered at such times is that every time we do this a little part of our spirit gets chipped away. So in the larger scheme of our life we need to decide which weighs heavier, the fear of rejection or a damaged spirit.

When we operate from ‘I am OK’ / ‘You are OK’, more often than not ‘lonely and misunderstood’ does not stand a chance. The people who recognize authenticity for what it is will respect and love us more for being able to stand up for ourselves. Like some wise man has said… ‘The people who matter won’t mind and the people who mind don’t matter’.

But, when being a leader and exercising leadership in an organisation, being ‘Popular’ is one of the biggest pitfalls! In General Colin Luther Powell’s (Former United States Secretary of State) words:

“Good leadership involves responsibility to the welfare of the group, which
means that some people will get angry at your actions and decisions. It’s
inevitable, if you’re honorable. Trying to get everyone to like you is a sign of mediocrity.“

Sacrificing ones own Integrity for the sake of appeasing the masses is surely a sign of poor Leadership! The cost is that sooner or later we will not have respect for our own self!!